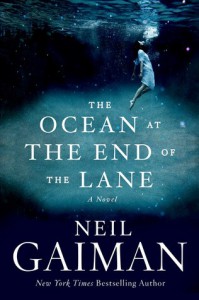 Lettie shrugged. “Nobody actually looks like what they really are on the inside. You don’t. I don’t. People are much more complicated than that. It’s true of everybody.”

This story is an amalgam of helplessness and innocent ignorance of childhood with universe-old wisdom, with mystery and wonder and unexplainable and unfathomable and things that lurk around the corners of reality and seep through the cracks in the world. There's friendship and love, and cruelty and resentment. And there are monsters - and, in the true fashion of the tradition I love, the real monsters come from the people's wishes, the people's own selves, the deep down dark that lives inside us.

Maybe once upon a time you were seven, and bookish, and lonely, and sometimes a stranger to your own parents. Maybe your first experience with deaths brought into your world a strange family of three living just down the lane in a little farmhouse - the Maiden, the Mother and the Crone of the fairytales. Maybe your first ever friend, eleven-year-old (or maybe infinities-old, who knows?) Lettie Hempstock, the girl for whom in your seven-year-old's sense of own immortality you nevertheless are 'perfectly willing to die' because - of course! - she is your friend, will take you on an unexpectedly sinister journey culminating somewhere and somewhen under the haunting orange sky. And maybe after that nothing will ever be the same.

“I’m going to tell you something important. Grown-ups don’t look like grown-ups on the inside either. Outside, they’re big and thoughtless and they always know what they’re doing. Inside, they look just like they always have. Like they did when they were your age. The truth is, there aren’t any grown-ups. Not one, in the whole wide world.”

And maybe something from underneath that sinister sky will choose you as a way to break through reality into your little secure world of a child. And maybe because of that you will come to a terrifying realization that the world is not safe, that adults may not be there to protect you, that world has teeth and is ready to bite you with them any time it wants to. And you realize that nothing is as it seems - and that there's no reason why the pond cannot be Lettie Hempstock's ocean, after all.

"I saw the world I had walked since my birth and I understood how fragile it was, that the reality I knew was a thin layer of icing on a great dark birthday cake writhing with grubs and nightmares and hunger. I saw the world from above and below. I saw that there were patterns and gates and paths beyond the real. I saw all these things and understood them and they filled me, just as the waters of the ocean filled me.

Everything whispered inside me. Everything spoke to everything, and I knew it all."

There are certain authors that in my mind have become a genre of their own. Neil Gaiman is one of them. When I read his books, I don't read fantasy, or urban fantasy, or any other such label. What I read is "a Gaiman", a unique blend of humor and dry wit and a strong narrative voice making the strangest leaps of imagination seem like nothing out of ordinary. And every time when I put down the book of his I've been reading into the wee hours of the night, unable to stop, I find myself with a haunting sense of longing and missing the world he created, the world into which he so effortlessly immerses his readers, the world of his storytelling that you never want to leave. It's like Lettie Hempstock's ocean, the waters of which you wish you never had to leave, but where you cannot stay forever, no matter how badly you would want to.

"I found myself thinking of an ocean running beneath the whole universe, like the dark seawater that laps beneath the wooden boards of an old pier: an ocean that stretches from forever to forever and is still small enough to fit inside a bucket, if you have Old Mrs. Hempstock to help you get it in there, and you ask nicely."

Neil Gaiman again is at his best, which for him is, I guess, just ordinary. This book will join my personal favorites by him - especially 'The Graveyard Book' to which it's a soul cousin. And I will revisit it in the future, probably more than once, just to hang out with Lettie and Old Mrs. Hempstock, and maybe to catch the hint of a wave on an ancient world-ocean in the back yard.

The face of the old woman on my right was unreadable in the gathering dusk. On my left the younger woman said, "You don't pass or fail at a being a person, dear.”