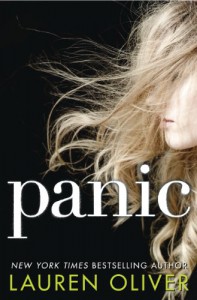 I bet this book will be loved by so many readers. After all, it has quite a it of potential, it's not badly written, and - thanks to all the literary gods - it mercifully lacks the unavoidable first-person narration that plagues the YA subset of literature.

For me, however, it fell a bit flat. And that's disappointing.

I did appreciate what Lauren Oliver (a relatively new author for me, by the way - I only read her sweet and adorable children's story 'Liesl and Po') tried to do here. She tried to tackle uncomfortable themes and take a YA story outside of its usual confines by giving a view of the real world that can be quite uncomfortable. I see where she wanted to take this story and what she tried - and actually succeeded - to bring into the spotlight.

The crushing poverty and oppressively suffocating drudgery of life in a dead-end small town without future, the desperate desire to get out and find a life you deserve instead of the one fate dealt you, the frantic attempts to find yourself and prove yourself, and the willingness to do *anything* to reach your goal and get out of Dodge Carp.

This stagnant desperation of life on the fringes of nowhere was what Oliver managed to describe memorably well, and I loved that she did not shy away from the monotone hopeless mundanity of it. The atmosphere was brilliantly crafted, and I loved it.

In this stuck-in-the-rut place there is a promise of the way out, however - it's the titular Panic, a game created a few years prior to the start of the book's events by local teenagers. It's a high-stakes Fear Factor-like¹ illegal competition between high-school seniors in which the last one standing wins upwards of 50 grand - enough money to hopefully turn one's life around and - for the current bunch of participants - a chance to leave the dying little town behind.

Played outside of knowledge of adults or law enforcement and carried out by anonymous judges, this game focuses on overcoming the contestants' fears - even though, in a bit of silliness, fear of spiders and Russian roulette are somehow equated here, and with every adult oblivious to what's going on, even if over a few short years there has been a number of casualties and deaths in this tiny town, and quite a few kids suddenly and unexplainably came into possession of hefty sums of money.

But the silliness of the premise of the game is possible to easily overlook, just suspending disbelief a bit. It's not what dissipated my enjoyment of this book.

No, what I found to be disappointing was the lack of character growth, which for me is an assassination of otherwise passable story. The two supporting characters - Natalie and Bishop - have absolutely no development whatsoever. But the main two - Heather and Dodge - do not fare any better.

Dodge, for instance, never stops being fueled by mindless drive for revenge, and it's only lucky unknowing interference by friends that saves him from

committing coldly calculated homicide - homicide planned for little else but hurting the relative of someone who hurt Dodge's relative.

Dodge does not grow or mature or address his stunted psychopathic desires - he gets helped by a lucky turn of events, little else.

Heather, planned as being the strong and sympathetic protagonist, has justifications for her initially immature and childish behavior piled on thick; she never has a chance to work through her issues but instead given a sob story with first her sister and mother, and then the unnecessary addition of tearjerking moment involving recollections of her father. It's not her growth we get to witness but rather the author trying to convince us of her noble and not-at-all stupid motivations, and really laying it on thick.


The lack of development of the characters therefore left me cold and detached, unable to immerse myself in the story, unable to truly empathize with them, and therefore unable to care.

What I also thought rang false was the complete lack of consequences for participating in this stupidly reckless game - the lack of consequences that did little but lower the supposedly high stakes. There was an excellent chance to bring moral grayness to the story when a bystander dies in the middle of this "game" -
but no, god forbid our positive teen characters actually see their stupidity costing dearly; no, just kidding, their victim actually died because of his own stupid choices, no harm done.
(show spoiler)
An attempted homicide - eh, nevermind, just kidding, we will just brush it under the table. Home invasion and burning of a building? Just child's play, no problem. Harboring illegal dangerous animals? No consequences as long as your heart is pure and caring. A game that is stupidly dangerous and ill-considerate of anyone else, in a true careless teenage fashion -well, but the good guys get the money so no harm done, let's carry on.

I found such approach highly irritating, to say the least. I prefer stories where actions have consequences, not where everything gets nonchalantly swept under the carpet.

And then the ending, the predictable, unexciting ending with an obligatory cinematic moment (
Oh hello there, adorable vicious tiger existing just for the heartwarming moment of Heather petting you fearlessly!
(show spoiler) ) and leading into the sugary sweet "All was well" epilogue. Honestly, I do not care for twists and turns of the plot; I do not need unexpected developments to enjoy the story - but in this supposedly suspenseful book there was never any danger of it ending any other way than it did, and it therefore felt unnecessarily flat and boringly comforting, which - trust me - were not the emotions this book appeared to be aiming for.
-----

Overall, was it a bad book? Not at all.
Did it use the potential it had? Sadly, not at all, either.
Would it make an entertaining read on a rainy evening? Definitely.
But would it make a lasting impression? No, not at all.