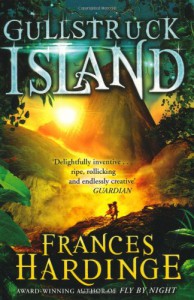 "Well, what did I want, recognition? No, Hathin realized, I did everything I did because, well, I’m me."

Frances Hardinge and her oddball magical fantastical stories that, far from the simplicity often expected of books aimed at slightly less wrinkled audience, are filled with thought-provoking multilayered and often ambiguous complexity, are undoubtedly my best literary discovery of 2013 so far. Her stories are soaked in belief that children's literature can in no way be inferior to that meant for adults, that a book "just for kids" is nonsense because excellent literature knows no age restrictions.

And so, true to this, Gullstruck Island (also known as The Lost Conspiracy in the U.S.) is built of so many threads that when put together create the vibrant tapestry of rich living world, intensely real and yet wholly imagined, with the unavoidable ugliness bubbling under its surface - the easiness with which prejudice and genocide can enter society, the stifling power of bureaucracy, and the mindless ugliness of the times when people stop being people and become the mob instead.

To borrow a phrase from China Miéville, Gullstruck Island is a story of the Un-Chosen One, a story of eternal sidekick not meant for anything particularly great, not a part of a greater plan or a prophecy or destiny hidden in some snowflake-special bloodline - no, just a person meant to be in the background, meant to be invisible, meant to be a supporting character and little else, who is forced to take center stage because sometimes someone just needs to do something when world is baring its teeth ready to bite.

"Mob wasn’t people. It took people and folded their faces like paper, leaving hard lines of anger and fear that didn’t belong to them."

Gullstruck Island, home to the ever-moody volcano chain towering over it in perilous slumber, is inhabited by an amalgam of native tribes that have mixed with colonizers of a few centuries ago and adopted the colonizers' worship of the dead ancestors, turning over the best areas of the island to the Domain of the Dead, the Ashlands. It is also a home to the Lost, the few special ones able to separate their senses from the body and send them miles and miles away independently from each other:

"Indeed, a gifted Lost might be feeling the grass under their knees, tasting the peach in your hand, overhearing a conversation in the next village and smelling cooking in the next town, all while watching barracudas dapple and brisk around a shipwreck ten miles out to sea."

And Gullstruck is also home to the Lace, a small isolated tribe despised by everyone for the deeds of centuries ago, distinct with their obligatory never-faltering smiles and jewelled teeth, pushed to the fringes of this society, never accepted but grudgingly tolerated, mocked for their adherence to the legends of long ago, and underneath all the mockery and contempt persistently feared. And there is only a perilously thin edge separating distrust and fear from hatred, violence and tragedy.

"You never knew where you were with the smilers of the Lace. They were all but outcast, distrusted by everyone, scratching out a living in outskirt shanty towns or dusty little fishing villages."

"It was a joke, but centuries of distrust and fear lay behind it. Soon somebody would say something that was sharper and harder, but it would still be a joke. And then there would be a remark like a punch in the gut, but made as a joke. And then they would detain her if she tried to leave, and nobody would stop them because it was all only a joke..."

Arilou is the hope of her people - a breathtakingly gorgeous girl who appears to be one of the revered Lost, a rare occurrence among the Lace. Hathin, on the other hand, was always an afterthought, a child meant to be little but a faithful attendant to her sister Arilou, and eventually quietly expected to cover up for her as suspicion arises that Lady Arilou may in fact just be, as people are on the verge of reluctantly almost-admitting, an "imbecile". In the meantime, Hathin is well-used to being, for all intents and purposes, invisible.

"Perhaps if a person went unnoticed for a long time the colour bled out of them, and they sank into greyness."

"As it happened, the girl supporting Arilou had a name too. It was designed to sound like the settling of dust, a name that was meant to go unnoticed. She was as anonymous as dust, and Skein gave her not the slightest thought. Neither would you. In fact, you have already met her, or somebody very like her, and you cannot remember her at all."

And then the unthinkable happens, and Hathin is faced with more pain than anyone should ever experience, and she makes a choice to step out of the shadows and take a lead - because her celebrated sister is little but a burden, and her home is destroyed, and genocide against her people is in full swing, and revenge appears the only viable option, and grief is suffocating, and ability to think around the corners from years as Arilou's "mouthpiece" may come in handy when nothing else is left.But discarding invisibility and taking center stage is not without consequences, and negotiating with mercurial volcanoes can lead to burial under tons of ash.

"Hathin was nowhere. Hathin was everywhere. Everything in the deathly landscape had her secretiveness, her careful blandness, her quietness, her stubborness. Hathin, whispered the wind-borne dust as it settled on the slopes. Hathin, lisped the ash as it rained upon the plain."

Hathin takes on a lot in her journey in this book. There are sleeping perilous volcanoes that cannot be offended for the fear of the most dire consequences. There are scared closed-minded people that are easily led by manipulators who know which buttons to push, which fears to capitalize on to turn people into a raging mob. There are age-old traditions and superstitions some of which can be discarded and some of which should be listened to - but which ones? And of course, there are those tirelessly working behind the scenes, making the world spin in the ways they would like it to, the invisible puppeteers holding the multitude of strings, the manipulators hidden in plain sight - because, perhaps, we choose not to see them. After all, hathin herself knows how perilously easy it is to become invisible.

"And yet, while Minchard Prox slept, things were happening across the island which he had not guessed at as he reshaped the world with his pencil."

"There was, he reflected, a greatness that came only with a certain kind of blindness. Prox had a mind that clung to order, a world of properly folded napkins, account books, modes of address when meeting a duchess. Papers were his servitors – he could make them perform and pirouette."

This is the story of loss and grief, of duty and obligation, of courage and defiance, of traditions and customs, of bureaucracy and power, of legends and reality, of childhood and growing up, of trust and betrayals, of grudges and resentment, of ability to forgive and move on, of family and love, of wounds and pain and the ocean of hurt, and of amazing resilience and necessity to make the world whole again.

'What do I do if nobody needs me?’

'What do you want to do?’ Prox asked quietly.

And, of course, it's the story of finding yourself and learning to live with the new you. And the story of making choices that you will have to live with, and they all leave consequences. And the story that I someday plan to strategically leave just within the reach of my future hypothetical daughter and quietly watch her eyes light up as she discovers the oddball magic Frances Hardinge brings into the world through her stories. 5 stars.

"Who am I? The shell-selling Lace girl, the attendant of Lady Arilou, Mother Govrie’s other daughter, the thing of dust, the victim, the revenger, the diplomat, the crowd-witch, the killer, the rescuer, the pirate? I am anything I wish to be. The world cannot choose for me. No, it is for me to choose what the world shall be."