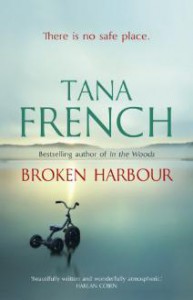 This may be my favorite of Tana French's novels, just barely overtaking In the Woods, and I loved it immensely.

At its heart, it's a book about the terror of madness, the dreams gone awry, the slow spiral that gets you to your breaking point, and the sad pathos of desperately grasping at the straws that tether you to the world of familiar safety of normalcy.

The setting of this novel scares me in the way it's grounded in reality. This is no longer Ireland of In the Woods, Celtic Tiger rushing onto the world's economy stage, a country high on the economic boom. No, this is a land hit hard by the recession, with people losing the spring in their step as disillusionment sets in after the economic high has dissipated, with people seeing their dreams of security floating away like dust in the wind - the dreams that they have spent so long fighting for.

As Tana French herself says in the interview found on Penguin.com,

"Now a solid proportion of our generation are stuck on half–built, half–occupied, abandoned estates with open sewage pits and no street lighting, miles from any friends or family, and many of their houses are falling to pieces. They’re unemployed or being taxed to the point where they can’t pay their mortgages, and no one’s ever going to buy their houses so they can move on. And their belief in a sane world, a world where they have any control over their own lives, has been smashed.

That haunts me. It should never have happened; it didn’t need to happen. And because Ireland is my home and I love it, I get seriously passionate and seriously angry about terrible things that are done to, and by, this country. That ended up shaping the book."

'I’m the least fanciful guy around, but on nights when I wonder whether there was any point to my day, I think about this: the first thing we ever did, when we started turning into humans, was draw a line across the cave door and say: Wild stays out. What I do is what the first men did. They built walls to keep back the sea. They fought the wolves for the hearth fire.'

Broken Harbour is the place that was supposed to become a seaside community of Brianstown, an estate of 250 homes filled with families enjoying the amenities, building lives, raising children while enjoying the seaside view. As it's not rare in the times of economic highs, it was quickly being put together to cash in on the promise of housing boom, with houses being sold even before they were built. And then the recession came, and Brianstown became a ghost estate, isolated from other communities, a place fitting its old name of Broken Harbour, with scarcely a fifth of houses occupied, with the rest in various stages of unfinished construction declining into disrepair, far from anything, with mostly empty streets and windowless unfinished future homes that will likely never be filled with life that isn't rodents or occasional squatters.

And the promised seaside view is nothing but the cold sea waves relentlessly and hauntingly crashing on the shore, filling the air with the ominous unfriendly sound.

'I didn’t tell him: the ghosts I believe in weren’t trapped in the Spains’ bloodstains. They thronged the whole estate, whirling like great moths in and out of the empty doorways and over the expanses of cracked earth, battering against the sparse lighted windows, mouths stretched wide in silent howls: all the people who should have lived here. The young men who had dreamed of carrying their wives over these thresholds, the babies who should have been brought home from the hospital to soft nurseries in these rooms, the teenagers who should have had their first kisses leaning against lampposts that would never be lit. Over time, the ghosts of things that happened start to turn distant; once they’ve cut you a couple of million times, their edges blunt on your scar tissue, they wear thin. The ones that slice like razors forever are the ghosts of things that never got the chance to happen.'

This is the place where the fleetingness of dreams becomes painfully clear, and not only depression but madness is threatening to break through the walls surrounding your home and life. It is the place where desperation lurks just around the corner, traveling along the deserted, ghostly streets. It is the place that epitomizes the rise and fall of the country.This is also the place where, in one of the formerly dream homes, the bodies of the four members of Spain family were found - Pat and Jenny in puddles of blood downstairs, stabbed viciously and repeatedly, and their small children Emma and Jack strangled upstairs, looking almost like they are peacefully sleeping. It appears to be a senseless tragedy, and only one of the Spains seems to have survived it - Jenny is hanging on to life by a thread in the hospital, in no condition to talk.And to add to the senseless gruesomeness of the murder, there are countless little things that when put together send the additional chilly shiver down the spine - the empty windows of the surrounding empty houses staring down into Jenny and Pat's yard and home - the perfect hiding places in addition to their unintended creepiness, the puzzling holes in the walls of the house, the skeletons of small animals, the baby monitors serving a purpose much different than that intended, the hints of life Pat and Jenny may have been hiding from the eyes of others, the bear trap in the attic, the online forum messages that become more and more desperately unhinged, and the unrelenting sound of sea waves in this ghost estate. All the little things that when added together can do more than just cause tiny little ominous cracks in the already stretched thin and desperate minds.

'The smell of the sea swept over the wall and in through all the empty window-holes, wide and wild with a million intoxicating secrets. I don’t trust that smell. It hooks us somewhere deeper than reason or civilization, in the fragments of our cells that rocked in oceans before we had minds, and it pulls till we follow mindlessly as rutting animals. When I was a teenager, that smell used to set me boiling, spark my muscles like electricity, bounce me off the walls of the caravan till my parents sprang me free to obey the call, bounding after whatever tantalizing once-in-a-lifetime it promised. Now I know better.'

Mick 'Scorcher' Kennedy is a Murder Squad Detective assigned to the case through which he also needs to take his new partner and rookie Detective, Richie Curran (the partnership that ultimately evokes the memory of the similar strong friendship connection between Rob and Cassie in French's first novel). Kennedy would appear to be the perfect man for this strange case - he's well-known for his sky-high crime solve rate, he always plays by the rules, he values his job above everything else, he focuses on the positive even in the darkest times, and he is a walking embodiment of ethics and rationality.

'Here's what I'm trying to tell you: this case should have gone like clockwork. It should have ended up in the textbooks as a shining example of how to get everything right. By every rule in the book, this should have been the dream case.'

But because this is a Tana French novel, we just know that before long we will see the unraveling of even the strongest characters, the breakdown of mental defences, the struggle for sanity - basically a poignant drama shrouded in the cloak of murder mystery. And as we inhabit the head of Mick Kennedy, as we get to hear his masterfully created narrative voice, as we - of course! - come to see the deep secrets that even he is hiding in the deep recesses of his mind, we cannot help but hold our breaths as the novel slowly glides to French's trademark soul-shattering mind-punch of an impact - not of the murder mystery itself but of the deep scars it leaves on everyone involved, the scars on the soul that will never fade.

I stayed up late into the night reading this book, fighting against the sinking feeling in my stomach telling me that I'm not prepared for the emotions that are to come, and loving every page despite the inevitable soul-crushing that I knew was coming. I would recommend it to anyone - and, since French's 'Dublin Murder Squad' series is really a bunch of unconnected novels, there is no reason not to start with this one.

Unflinching, depressing, scarring, soul-breaking five stars - and a flash of terror every time I think I may hear something scratching in the attic.