'The Boss' - a.k.a. 'When better writers want to show EL James how it's done' 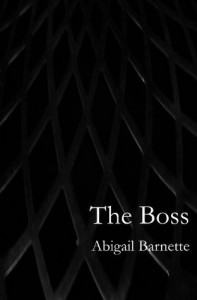 Normally, I don't read erotica. Just not my cup of tea, so to say. I do gynecology for a living¹; no need to venture to the 'private parts area' in my spare time.

¹ I could not resist posting this picture. It's just too awesome.

Or maybe I was just too scarred by my venture into that territory, courtesy of Ann Rice. This book, however, may have helped fix my literary post-Ann-Rice PTSD.

For a year or so, I have been happily following the blog of Jennifer Armintrout/Jenny Trout for the brilliant and painstakingly hilarious recaps of that toxic and poorly written 'phenomenon' - Fifty Shades of Grey, obviously - that apparently, according to the media, represents everything¹ that women should want from life.

¹ By "everything", I mean a rich 'hero' who knows what's good for 'his' woman and whose abusive behavior can apparently be interpreted as love by the shallow vapid useless 'heroine'.

Why exactly it has become so mind-boggingly popular is beyond me.

"And I thought it would be fun to write a book that has the flavor of Fifty Shades of Grey, but not the non-existent conflict, the abuse masquerading as romance, or the heroine who dumps her entire life to be owned by some dude."

Sophie is a young woman working on her career in fashion industry. She is sexually experienced, confident, and does not view other women as competition (a trait that for whatever reasons seems to pervade literature aimed at women. Blargh.).Neil is an incredibly rich middle-aged man with a flair for a bit of kink - the kind that does not come with a requirement of being an asshole to the rest of the world (are you listening, Christian Grey?) They start a relationship, but their lives do not revolve around the romance alone. There's actual plot in this book, believe it or not.

I'm not going to pretend that in the attempts to avoid the pitfalls of 50 Shades of Grey, The Boss does not frequently try a bit *too* hard - but, honestly, give me a book that tries too hard to avoid the abuse and misogyny any day over a book that portrays such things as the pinnacle of women's desires.

Here's the quick list of what I appreciated in this book:

- A healthy portrayal of female sexuality that is NOT focused on the naive innocence of the heroine that can only be awakened by the special Chosen One.
- A strong depiction of friendship between women, NOT falling into the pitfall of assuming that (a) women have to view all other women as competition, (b) only the ugly and undesirable women - therefore not a competition to her - can be her friends, (c) women are always assholes to one another because everyone wants to be a bratty center of attention for all men around.
- A romantic relationship that is build on trust and respect - and is not confusing the kinks in the bedroom with the events happening in the non-bedroom life.
- A career that is actually important to the heroine; a job that is not just an excuse to meet the man of her dreams.
- Depictions of sex that can actually use the adult words for body parts instead of constant euphemisms of 'down there' and such. Blergh.
---------------
As I've said above, I don't really read erotica and I don't quite get the hype around the genre. Because of this, I may not quite 'get' this book like an intended audience (a.k.a. people who *do* read this genre) would - but even then I'm still able to appreciate decent writing, good characterization and determination to avoid the pitfalls making books like '50 Shades' quite unreadable.

A star rating is difficult for me to assign as this is not quite the book I'd normally read and enjoy, but 3.5 stars at least would be a safe bet. A fun read overall.
Tweet